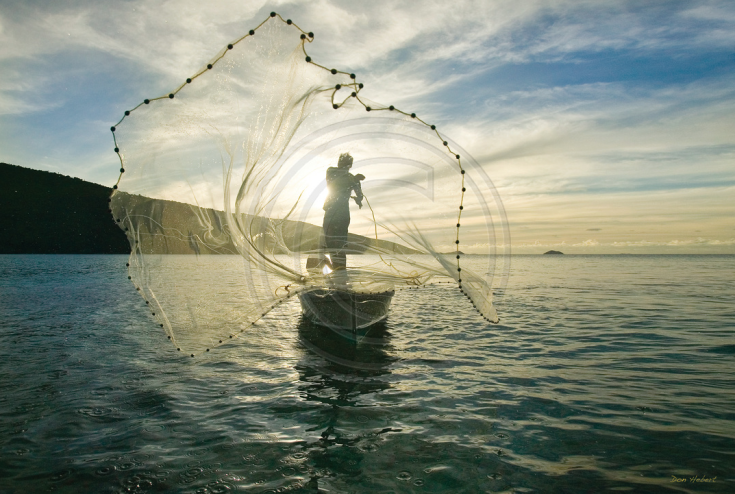 This past Sunday’s gospel reading was so beautiful, wasn’t it?  I have shared it under this post in case you’d like to re-read.  There is so much in that one reading to soak in and ponder… here is just a little something about nets I’ve been thinking on.

Peter, a fisherman at heart, may feel a little lost.  All he had known for the past 3 years, had abruptly come to an end.  This Jesus, who he had followed unreservedly, had left behind family, work, and everything else… This Jesus who raised the dead to life, who multiplied a few loaves of bread to feed thousands, who made the blind see, the lame walk, the deaf hear… This Jesus who taught him Truth, who sought Goodness, who showed him Beauty… this Jesus who wept at Lazarus’ death, who taught him how to preach to the multitudes and take rest in the quiet of a hillside… This Jesus who calmed the storm, who walked on water, who reached out and grabbed his hand when he started to lose faith … This Jesus, who had changed him, formed him, taught him, broke down his walls, re-shaped his heart, and taught him how to love and be loved… this Jesus, who changed the bread into His own Flesh, and the wine into His own Blood, who taught him to continue this on, in His memory, in the Mass… this Jesus who made him a priest, a priest to serve His people, a priest to tend His flock, a priest to bring Christ to all through the sacraments, a priest who became pope to guide the Church, to be the vicar of Christ… This Jesus suffered and DIED.  His God, his Savior, His All, was hung on a tree and died.  He died.  For all of us.  For Peter.

And then, He rose.  He rose from the dead.  Imagine Peter… imagine being told by the women that the tomb was empty, and running with John to the tomb, out of breath, reaching the entrance, seeing the empty tomb, and the linens tossed to the side.  What to do?  And then he hid in the upper room with the disciples.  And Jesus appears in that upper room and says “Peace be with you.”  And that peace comes and rests on his heart.  And when Jesus leaves Peter’s presence that day, the peace still lingers.  He knows his God lives.  He may not understand all, but he knows deep in his soul that his Savior truly has risen.  And yet, what happens next?  What is Peter to do?

And so, Peter decides to go fishing.  That is what he knows.  He knows how to fish.  Maybe just being out on the boat and casting those nets brings his heart a little peace with all this unknown.  Letting the sun chase away some of the confusion and the breeze off the water push the questions out of his head so he can clear his mind a little.  “I am going fishing.”  And what do the other disciples do?  Well, they go too.  They follow their shepherd.  All night long – they caught nothing.  Nothing.  They would cast those nets out, far and wide, on different sides of the boat, all night long, and each time they would pull those nets back up – empty.

And then, Jesus is there.  Standing on the shore.  Peter doesn’t recognize Him.  This Man on the shore calls out to him telling him where to cast his net.  Perhaps a thought crosses Peter’s mind, “But I just cast the net on the right side a bit ago.  I’ve been casting all night.  There are no fish.”  But still, Peter, in an act of humility and with an ounce left of hope, casts the net.

And what a catch!  The net was full and overflowing with fish.  One miracle.  And the net didn’t break.  Another miracle.  John knows, and he tells Peter who the Man is on the shore.  It is the Lord! Peter’s joy at that moment… the swelling of his heart… it could burst.  He doesn’t wait to haul in the boat and fish, but jumps in the water and swims to shore, to see his Lord.  Then Jesus needs fish for the fire… so Peter is back in the water again, hauling that huge net in excitement.  Peter is in Jesus’ presence again.  His heart is at peace.  He is home, for Christ’s heart is his home.  The gospel goes on to tell of their exchange … and that is another post for another day…. it is so beautiful.

There are times in our lives of empty nets.  Sometimes we cast our nets, and don’t ask Jesus for His help… and so we can come up empty.  Maybe our intentions are not as genuine as they can be and selfless, but perhaps a bit self-seeking, and the net comes back empty.  Sometimes, we cast our nets, trusting, and waiting.  And we have to wait until it’s time.  God knows the perfect time.  In the meantime, we keep casting our net.  We keep asking for that prayer intention to be answered.  We keep doing the work, and waiting for grace.  Praying for strength to keep asking, to keep casting, to keep waiting.

When it IS that time, His grace will be so abundant; it will be overflowing.  And our hearts will overflow, and bend and stretch, but will not break.  He will always supply the strength for the nets, and the fish to fill them.  May He fill our hearts to overflowing, and may He grant us patience and fortitude while we wait on the boat, casting our nets, time and time again. 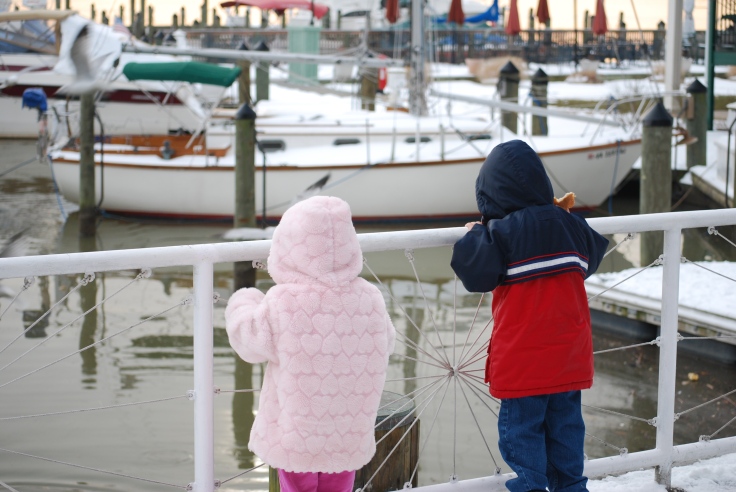 (T & T many years ago at the dock in Old Town Alexandria, VA)

At that time, Jesus revealed himself again to his disciples at the Sea of Tiberias.
He revealed himself in this way.
Together were Simon Peter, Thomas called Didymus,
Nathanael from Cana in Galilee,
Zebedee’s sons, and two others of his disciples.
Simon Peter said to them, “I am going fishing.”
They said to him, “We also will come with you.”
So they went out and got into the boat,
but that night they caught nothing.
When it was already dawn, Jesus was standing on the shore;
but the disciples did not realize that it was Jesus.
Jesus said to them, “Children, have you caught anything to eat?”
They answered him, “No.”
So he said to them, “Cast the net over the right side of the boat
and you will find something.”
So they cast it, and were not able to pull it in
because of the number of fish.
So the disciple whom Jesus loved said to Peter, “It is the Lord.”
When Simon Peter heard that it was the Lord,
he tucked in his garment, for he was lightly clad,
and jumped into the sea.
The other disciples came in the boat,
for they were not far from shore, only about a hundred yards,
dragging the net with the fish.
When they climbed out on shore,
they saw a charcoal fire with fish on it and bread.
Jesus said to them, “Bring some of the fish you just caught.”
So Simon Peter went over and dragged the net ashore
full of one hundred fifty-three large fish.
Even though there were so many, the net was not torn.
Jesus said to them, “Come, have breakfast.”
And none of the disciples dared to ask him, “Who are you?”
because they realized it was the Lord.
Jesus came over and took the bread and gave it to them,
and in like manner the fish.
This was now the third time Jesus was revealed to his disciples
after being raised from the dead.
When they had finished breakfast, Jesus said to Simon Peter,
“Simon, son of John, do you love me more than these?”
Simon Peter answered him, “Yes, Lord, you know that I love you.”
Jesus said to him, “Feed my lambs.”
He then said to Simon Peter a second time,
“Simon, son of John, do you love me?”
Simon Peter answered him, “Yes, Lord, you know that I love you.”
Jesus said to him, “Tend my sheep.”
Jesus said to him the third time,
“Simon, son of John, do you love me?”
Peter was distressed that Jesus had said to him a third time,
“Do you love me?” and he said to him,
“Lord, you know everything; you know that I love you.”
Jesus said to him, “Feed my sheep.
Amen, amen, I say to you, when you were younger,
you used to dress yourself and go where you wanted;
but when you grow old, you will stretch out your hands,
and someone else will dress you
and lead you where you do not want to go.”
He said this signifying by what kind of death he would glorify God.
And when he had said this, he said to him, “Follow me.”

One thought on “Casting Our Nets”